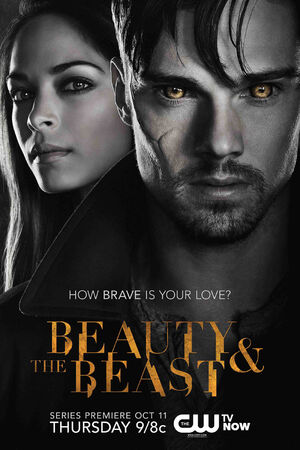 Beauty and the Beast is an American television series loosely based on the 1980s CBS series of the same name created by Sherri Cooper-Landsman and Jennifer Levin that premiered October 11, 2012 ran on The CW from October 11, 2012 to September 15, 2016, for a total of four seasons and 70 original episodes.

Catherine “Cat” Chandler (Kristin Kreuk) is a smart, no-nonsense homicide detective, who is haunted by her own tragic past. When she was a teenager, Cat witnessed the murder of her mother at the hands of two gunmen. Cat would have been killed too, but someone – or something – saved her. No one has ever believed her, but she knows it wasn’t an animal that attacked the assassins…though it was strange and terrifying, it was human.

Years have passed, and although she thinks about her mother every day, Cat is now strong and confident, a capable police detective working with her equally talented partner, Tess Vargas (Nina Lisandrello). The two women make a good team, and have become close friends while working on countless homicide cases under the supervision of their tough-but-fair boss, Joe Bishop (Brian White). Cat has also become close to another co-worker, the medical examiner Evan Marks (Max Brown), and they’ve developed a fun, flirtatious relationship that could easily turn into something deeper – if Cat would let that happen. However, much to the concern of her younger sister, Heather (Nicole Gale Anderson), Cat’s romantic inclinations tend toward bad boys.

While investigating a new case Cat and Tess discover fingerprints that lead to a handsome doctor named Vincent Keller (Jay Ryan), who was reportedly killed by enemy fire while serving in Afghanistan in 2002. Digging deeper, Cat learns that Vincent is actually still alive. For mysterious reasons that have forced him to live outside of traditional society, Vincent has been in hiding for the past 10 years. With the help of his childhood friend J.T. Forbes (Austin Basis), Vincent has been able to guard his terrible secret – when he is enraged, he becomes a terrifying beast, unable to control his super-strength and heightened senses. Cat is stunned when Vincent admits he was the “animal” who saved her the night of her mother’s murder. Vincent doesn’t admit the whole truth – he is emotionally tied to Cat and has been watching over her for years.

Cat agrees to protect Vincent’s identity in return for any insight he may have into her mother’s murder. Thus begins a complex relationship between Cat and Vincent, who understand that their connection is extremely dangerous for both of them. Cat’s secret obsession with Vincent puts a strain on her relationship with everyone around her, and Tess is especially troubled by the feeling that Cat is keeping something from her.

Perhaps the most surprising element of their relationship is that Vincent soon becomes a secret but important part of Cat’s detective work. During the years he spent hiding in the shadows, watching over Cat and other innocents, Vincent learned a lot about the darkest parts of the city and the people who live there. His sharpened instincts, incredible strength and human compassion become invaluable to Cat as she works to bring criminals to justice.

As she slowly comes to terms with Vincent’s monstrous alter-ego, Cat senses she can trust him in ways she hasn’t been able to trust any man before and, despite the obstacles between them, she realizes that she’s safer with him than anyone else.

Beauty & the Beast has received negative reviews from critics. The review aggregator website Rotten Tomatoes reported a 20% approval rating with an average rating of 3.2/10 based on 30 reviews for the first season. The website's consensus reads, " A thoroughly middling romantic fantasy series, Beauty and the Beast suffers from a silly premise, mediocre writing, and bland characterization." The series was given a 33 out of 100 score on Metacritic, indicating "generally unfavorable" reviews from 19 critics. Kyle Anderson of Entertainment Weekly gave the pilot of Beauty & the Beast a C- grade, stating that it lacks the same charm that the 1980s drama had, and that 'The Beast' is more of a Hulk rather than an actual beast. David Wiegand of the San Francisco Chronicle called the series an "overheated, badly written, wretchedly acted and unconvincing drama, which makes mincemeat out of the traditional beauty and the beast fairy tale." Mary McNamara of Los Angeles Times also made similar observations but praised Nina Lisandrello who still remains as the only cast member in the show to ever receive a positive review. About Lisandrello, McNamara wrote "the only point of light is provided by Catherine's partner, Tess, who, as played with great common-sense appeal by Nina Lisandrello, clearly deserves to be on a better show." More mixed but slightly favorable reviews were provided by David Hinckley of the New York Daily News, who said the series was "such a natural it's downright devilish" and Neil Genzlinger of The New York Times, who stated the "girl-power themes will probably play well to the network's core audience."

The CW Television Network officially began developing the series in September 2011. The project was described as "a modern-day romantic love story with a procedural twist." The show is the first project that new president Mark Pedowitz developed when he joined the network.

In the United States the show is scheduled to air on Thursdays at 9/8 central following The Vampire Diaries.

The series has been picked up in several countries by these networks:

Promo shots of the cast

Retrieved from "https://beautyandthebeastcwshow.fandom.com/wiki/Beauty_and_the_Beast_(TV_Series)?oldid=16496"
Community content is available under CC-BY-SA unless otherwise noted.